The Joys of Jell-O and Snow Pudding 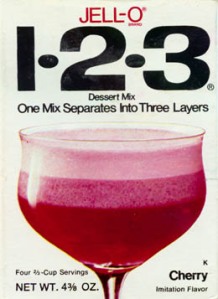 You loved it as a child; it horrifies you as an adult. And yet, and yet, when you’re sick, hungover or have just given birth, it’s just the ticket. You could eat it by the truck load and bring on the crushed pineapple. You know what I’m talking about: Jell-O.

Now when I was growing up, “salad” meant only one thing: Jell-O chockablock with gut busting additives – mayonnaise, walnuts, mini marshmallows, fruit cocktail. This persisted well into the 80s when other families had moved on to radicchio, endive and arugula and had long since deep-sixed the packets of Good Seasons in the pantry. I still recall the first time I saw that little plate with the brown iceberg lettuce shard, the mealy tomato slice and the limp cuke covered in glorious Green Goddess dressing sitting on top of my dinner plate. “What the hell is this madness?” I wondered, only to be further mystified when told it was salad. Where was the Jell-O?

These days, we still roll out the Jell-O salad once a year at Thanksgiving in fond tribute to Grammie Sue, who never made a salad she couldn’t count on for an insulin reaction. Sometimes it’s the green one with the Cool Whip and the pineapple, which I believe she called Waldorf though it bore no resemblance whatever to Waldorf salad; other times it’s a more exotic red one with canned blueberries and cream cheese, and I don’t mind saying both are mighty fine.

Tempting though the original article is, these days I serve this very adult version of lemon Jell-O, which we always called Snow Pudding, though some call it lemon sponge and others refer to it as lemon mousse. Semantics. It’s a delicious light lemon dessert that, when paired with a soft custard, which Grammie always called hard sauce – that woman was a mass of contradictions – offers a truly sublime combination of tart/cold and creamy/warm. Be forewarned, it contains uncooked egg whites, but if you’re in the mood for a walk on the wild side, why not give it a try?

Soften gelatin in 1/4 C of cold water for about 3 minutes. (In other words, dump the envelope of gelatin into the water)

Add boiling water, lemon juice and rind, and sugar. Stir until dissolved. I use a whisk.

Let sit for 2 minutes or so.

Strain to remove rind and seeds and anything else that’s floating around in there.

Cover and refrigerate until almost set.  This is critical. The gelatin should just barely hold its shape before slithering off the spoon.

In another bowl, beat the egg whites until stiff. No way around it. You need two bowls.

Whip the gelatin until fluffy.

Add the stiffly beaten egg whites to the fluffy gelatin and continue beating until stiff enough to hold its shape. Don’t fear the egg white! Just whip it all up.

Pour into individual glasses (or just leave it in the bowl if you prefer) and chill until firm.

In a saucepan, bring the milk/half & half mixture just to the boiling point. It should have a thin “skin” on top. (This is “scalded” milk.)

Remove the pan from the heat.

Whisk together eggs, sugar and salt in another bowl.

Cook over low heat (or in a double boiler if you have one. I don’t.) stirring constantly, until the custard begins to thicken and coats the back of a clean spoon (one you have not licked). Just barely boil it.

* * * If you overheat the custard it may “break,” and will look like it’s curdled. DON’T PANIC. Just take it off the heat and whisk it hard until it comes back together. No harm, no foul.

Once the custard is thickened to the consistency of a thick sauce, remove it from the heat, stir in vanilla and let it cool covered on the counter.

NOTE: Don’t refrigerate this custard unless it’ll be a couple of days before you serve it. Refrigeration tends to negatively affect the consistency. It’s fine to sit out on the counter for several hours as long as the weather’s not too hot.