← The Marking The World Project
What the hell are they smoking down there? →

Start with the classic chuck eye, rolled and tied.

I don’t know what traditions you grew up with, but in New England in the last century, Sunday dinner was served at mid afternoon — 4 pm if the Pats were playing at home, 3:00 if they were out west, and earlier in summer as dictated by the Red Sox schedule. The only exception to this rule was Thanksgiving when, owing to the sheer magnitude of the task and the grudgingly accepted need to put the holiday first, bowl games took a back seat to dinner — unless they involved BC.

There was a real art to simultaneously getting the meat, potatoes, veg, gravy and rolls to the table while they were still hot and appealing. As such, some of my earliest memories involve my mother nervously inquiring, “Are we going to OT?” only to be told “I don’t know, dear, looks like it’s gonna’ be a squeaker.”  This, of course, escalated the anxiety, rather than assuaged it. My family was not alone in this, and I suspect it was not an exclusively regional phenomenon either.

Personally responsible for even more ruined dinners than me.

Now, getting a roast chicken or turkey to the table under those conditions was difficult. When a bird is done, it’s done and must be eaten, unless of course you happen to prefer dried out poultry. Pork too can be tricky, but trichinosis fears being what they were back then, everyone assumed pork roast would be dry, so expectations there were somewhat lower and easier to meet. In fact, it was not until well into my twenties that I actually had a moist and delicious pork loin, but it was courtesy of the magnificent Niçoise Chris Hodgkins, and I have never been able to replicate it in my own kitchen.

Anyhow sports Sunday is why, I think, braised meats were so often the go-to meal for a Sunday afternoon. In corned beef, pot roast or a smoked pork shoulder you have a protein unit that really can’t be overdone, and quite often the vegetables can be cooked right in with the meat, which is always a mercy. In my experience all are nearly foolproof, and doubly so if you have a crockpot.

So with Superbowl Sunday on the horizon, I’ve been thinking about those football dinners, and I got a hankering for pot roast. Now, as I am the only mammal eater in my house, a little goes a long way, but that’s the beauty of pot roast. The leftovers are as good, if not better, than the original meal, and you have ample gravy to make beef pot pies. Just freeze the meat and gravy and pull it out later, which is exactly what I’m going to do next week for the gala Superbowl party and celebration of Patriot redemption set to take place right here in Slattern central.

So without further ado, here it is. You can thank me later. And you will.

Note: If you don’t have a crockpot, you can use a Dutch oven (in other words a large deep saucepan with a lid) or even a big cast iron skillet covered with tin foil in an emergency. Cook the pot roast on top of the stove on a very low heat for four to five hours. Just keep an eye on it. 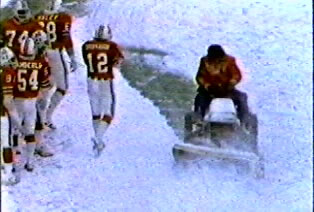 ← The Marking The World Project
What the hell are they smoking down there? →