As my regular readers may recall, I recently spent a little vacation time in the Bahamas, where I was treated to the first class bartending services of Sammy at the Cocodimama Hotel, for better or, on at least one evening, for worse.

Bad tourist behavior notwithstanding, the man gets up to some serious mixology and Mr. Slattern and I were delighted to make regular use of his sevices. We tried all manner of rum drinks, which used all manner of flavored rums. My personal favorite was the Bahama Mama. Now, Sammy makes a Bahama Mama without the aid of passionfruit juice and confines himself to white rum and coconut rum, and if you want to follow the original recipe just skip the dark rum and passionfruit juice and double up on the orange juice in the tarted up version of the recipe below.

My version, which I have christened the Passionate Island Tart, is a bit stronger and spicier owing to the dark rum, with a hint of tartness from the passionfruit juice. You can serve it over ice or if you’re really feeling that island spirit, tie on a sarong, drag out the blender, and throw everything in with some crushed ice. It will not disappoint. 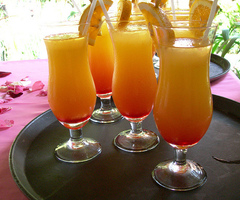 Combine all ingredients except grenadine in a shaker and pour over ice in a tall, preferably shapely, glass. Slowly pour grenadine on top and allow it to settle. Garnish with fruits of your choice. Orange, pineapple and maraschino cherries strongly suggested.