← The Bitch is Back
Help me Technical Support. You’re my only hope. →

When exactly did the humble baby stroller become a Humvee?

Outta my way shitbirds, or I’ll light you up like Sesame Street on a Saturday night.
Courtesy graphicshunt.com.

Damned if I know. For the past fifteen years, I’ve been out of the stroller game and otherwise occupied with the usual assortment of science fair crises, bake sale scrambles, emergency room visits (not all mine), tween angst and teen drama. Lately, however, I find I spend a lot of time thinking about prams and the like, more often than not because I am either tripping over one, cleaning a gaping wound on my extremeties caused by one, or popping some totally legitimate prescription pain medication to treat the back strain caused by helping some poor babysitter hump a fully loaded carriage up the subway stairs. Apparently boss mamas are not overly concerned about the portability of their perambulators as it’s just the help who have to hoist them; Mama drives to Fairway.

Also keeping the stroller top-of-mind is the recent phenomenon of sidewalk shrinkage in my neighborhood and the metropolis generally. How else to explain the daily barked shins, crushed toes and human gridlock I experience virtually everywhere I go? Now I’m willing to admit that I may take up just a tad more space than I once did, but my expanded girth cannot be solely to blame for the constant squeeze play that a stroll on a city street has become.

It’s not me, you see; it’s the baby strollers. Not only are there more than I can ever remember seeing, but they have  become larger, heavier and far more pimped out than in my day. Here’s what the little Slattern rode in way back when:

Elegantly minimal. $20 and weighing roughly as much as a large bag of Peanut M&Ms.

These days coffee cup holders, running boards, back seats, iPod jacks, cargo holds, satellite uplinks and monthly detailing all appear to come standard. As far as I can tell, modern carriages do not push themselves, which would be an upgrade worth paying for, yet they clearly cost an arm and a leg. Curious to find out exactly what kind of prices these things currently fetch, I took a sniff around Baby Depot, where I had to slog through over 100 models to find anything priced below $200. The top of the line: $1,099.99 for the Switch Four Modular System, which is probably what Jonny Quest rode in. This of course begs the question, Who pushed it, Race Banon or Dr Quest? Also, where did Hadji sit or did he have to walk behind the stroller? Was there a place for Bandit?

Horrified as I was at the stickers on these things, I was all afire to find out how high they went. You would not believe what I found. The highest priced one I saw was a $4,500 model called the Roddler from Kid Kustoms.  That’s right, five large by the time you pay tax and shipping. Check it out: 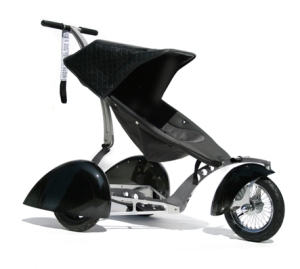 Look at the front end of that thing. Get within two inches of it and it’ll peel your shin like an apple. Of course the afterburn from the rear thrusters could conceivably have a cauterizing effect, so maybe it really is worth the cost of a semester at one of our finer state universities.

Now, in fairness, it must be pointed out that the Roddler is fully customizable and comes in a variety of fun colors and finishes, including ostrich leather. At least I think it does. According to the website, a substance that looks remarkably like ostrich hide is listed as “Ostridge Skin.” See?

I couldn’t make this stuff up, folks.

Déclassé as I apparently am, I don’t see the appeal of Ostridge products or, mayhaps I am not completely up to date with the luxury market. (I did look up Ostridge, but the definition I found in the Urban Dictionary was so disgusting I can’t bring myself to link to it. In any case, spelled that way it’s a VERB.) What I probably need is to have a Kardashian ‘splain it all to me. Apparently one of them – Klamydia I think – pushes her little bundle of joy around in a Roddler, though whether his ride is tricked out in quilted leather or Ostridge is anybody’s guess. Clearly, though, the Roddler is a must-have for hot moms in the dough.

You’d think that this might be the end of it, but all this research, in addition to giving me a vicious thirst that only a double vodka can slake, has led me to ask one final question, namely “What next?” A little more internet digging, and I think I’ve found out. Soon to dent your shins, obstruct your path and break your nanny on a sidewalk near you, behold the Rambette… 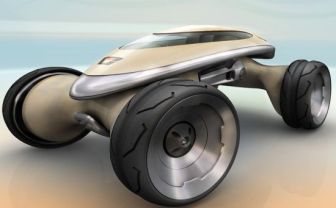 The next evolution of the baby stroller, the Rambette, courtesy designbuzz and NATO.

I’m going to have to start taking my broomstick everywhere.

← The Bitch is Back
Help me Technical Support. You’re my only hope. →