← Giada is BUSTED!
Who put Stevie in charge? →

Visual literacy, or how to tell if that guy in the next office is going to drive you out of your mind before he ever opens his mouth 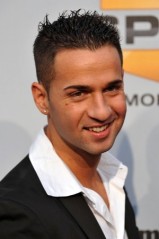 Unless your photocopier is broken or you run a tanning salon, you probably won’t encounter this guy, but just in case you do…

You may not be able to judge a book by its cover, but it doesn’t take much more than a glance to get a good idea what the story’s all about. And so it is with new acquaintances, both social and professional. I find that being able to get a quick handle on new people is an extremely useful skill, as it helps you avoid the undesirable, the annoying and the certifiable before they can stake a claim on your time, your attention or your guest room.

Does my tendency to take others at face value make me a bad person? Nah, shallow maybe, but not bad. What it does make me is a happier person – one who rarely has to duck a neighbor, hide behind a newspaper in the employee cafeteria, or make good on a threat to file a restraining order, though of course that misunderstanding with Anthony Bourdain did involve an order of protection…sadly, not on my behalf, but we’re well past all that now. At least I am. I’m not so sure about Tony.

Anyways, for those of you who are not familiar with the more common hallmarks of the crazy and/or obnoxious and what they communicate, here’s a little primer on how to pick out some of the most easily recognized signifiers that say, “back away now while you still can.” An ounce of prevention, as they say, is worth a pound of Tums. 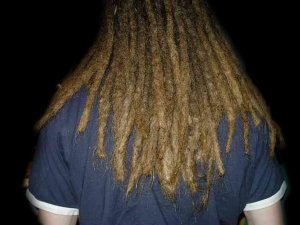 Blond Dreads
“I hate my parents almost as much as I resent my trust fund. Sooner or later I’ll hate you, too.”

Birkenstocks
“High heels reduce women to sex objects. I refuse to be objectified.”

French Manicure
“How’m I suppostah know wheah ya’ check is?
I’ll ax Mistah Nussbaum when he gets back, ahright?”

Scraggly, Bald Ponytail
“I still got it, baby. You want some?”

Adult GRRanimals
“My wife dresses me (so I behave like an adolescent).” 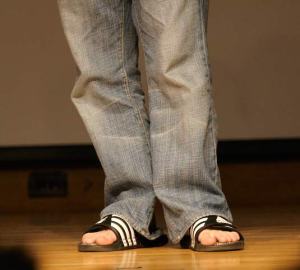 Hideous, Inappropriate Footwear
“I dress myself (and I just made ten trillion dollars off an idea I stole).”

← Giada is BUSTED!
Who put Stevie in charge? →