← Whyfor the Pantry, Readers?
In defense of the Noble Drunk →

My Sacred Quest for the One Bowl Meal

Having realized my goal of locating several pleasingly dry, sparkling wines under $20 (Gruet and virtually anything with a Crément de appellation, among others), I need a new goal, but not just any goal. No search for a suitably stinging riposte to French taunting, or source for perfectly ripe avocados every time, not even a low carb cookie that tastes like it was made from something other than the mixing bowl dregs of a Costco “bakery” will do. Nothing as mundane as that.  I need a mountain to climb, a fortress to take, a fountain of youth to discover and turn into an early retirement account. And I think I’ve found one. 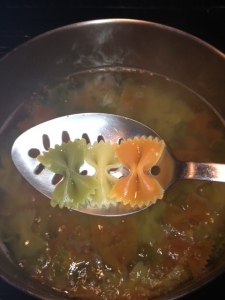 What I’m searching for is a small collection of nutritionally complete, tasty one-bowl meals that can be prepared and served in 20 minutes or less, in one pot, then cleaned up in five minutes. The recipe doesn’t have to be elaborate, or exotic, just pleasing to the palate, easy on the waistline and unlikely to induce vomiting.

What’s that you say? It can’t be done? Faugh! That is correct, I said faugh, with an outrageous accent no less. I made my first run at it tonight and though the timing came in at just over 23 minutes from fridge to plate, if I limit pre-dinner cocktails to three next time and use fresh pasta instead of dried, I’m quite sure I can get it done in under 20. With Mr. Slattern (no English bedwetting type, he) helming the clean up, not only was the entire meal cleaned up in five minutes, but it also got done the same night it was served. It’s like a miracle!

So without further ado, here it is:

Here’s what you do: 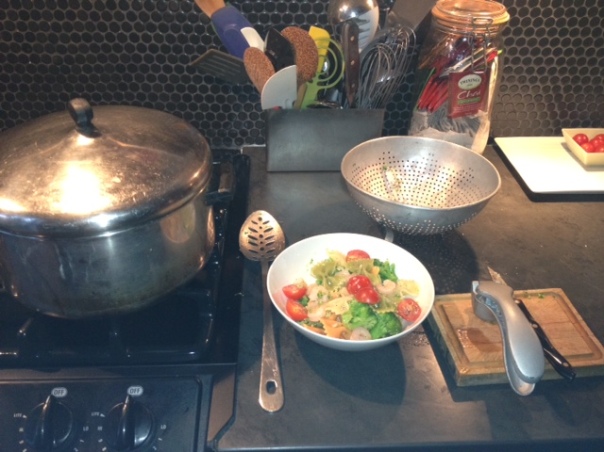 Clean up’s a breeze. At least that’s the way it looked from under the table.
Photo property WS Winslow

← Whyfor the Pantry, Readers?
In defense of the Noble Drunk →