← Keep Out
The gods must be chubby → 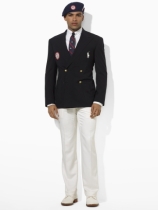 GI Joe as styled by Barbie.

I’m a sports fan, and unapologetically so. I love it all, and provided Boston is playing (or someone — anyone really — is beating the Yankees), I will happily sit in front of the tube for hours while working my way through a handy pack, watching baseball, football, basketball or hockey and turning the air blue with a filthy stream of invective and smack talk. In truth, I’ve even been known to take in the final rounds of golf tournaments, various college sports and the odd tennis match. I do have some standards, and as such I draw the line at bowling (it’s the shoes) and NASCAR (it’s just, I don’t know… everything).

This year, however, owing to some pressing personal commitments I haven’t really been following the Olympics. Just not that into it somehow. I missed the opening ceremonies and the unfortunate American athletes in their Pepé Le Pew costumes. I missed Sir Paul whipping the crowd into a nostalgic frenzy. I missed the Queen with her silly pink hat and her mean mouth.

But Sunday after dragging my ass to the gym, I finally got the Olympic bug while slogging along on the elliptical, and here’s why:

Horses prancing sideways, top hats, formal dress and a big group of people who actually got ponies for their fourth birthdays! And it appears it’s all taking place at Downtown Abbey! I cannot get enough of the equestrian events.

I am totally hooked. Or hoofed, perhaps. I can’t wait ’til the rodeo part gets underway — no one beats the US of A in roping and barrel riding.

Whaddya mean there’s no rodeo competition? No clowns? No bulls either? Not even a lasso contest? What a gyp.

← Keep Out
The gods must be chubby →