The Bridge to Hell

What’s the worst pop song ever?

So last night Mr. Slattern and I were having a rollicking game of Scrabble while working our way through a bottle or two of something or other. Since I was knocking the slop out of him (for a change), we decided to lighten the mood (his anyway) by adding a bit of music to the evening’s festivities. Not wanting to interrupt the flow of things, we just picked a random satellite channel and got on with the contest. 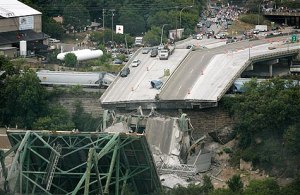 The name of the station was, I believe, “The Bridge.” I tell you this out of the goodness of my heart and to save you a world of hurt. Should someone you love, or you yourself, ever stumble upon this house of musical horror, turn around and return to the preceding station, or any other you can find, even if it’s the one with the all-Grateful Dead format, because let me tell you that spending the next few minutes with Jerry’s kids will be infinitely less painful than being subjected to the playlist of The Bridge, whose format is described on its website as follows:

Cross The Bridge to the softer side of rock. Stress-free music from Jackson Browne, Bonnie Raitt, Van Morrison and Elton John. Nothing too hard, just great mellow rock.

Here’s how I’d describe it: A trip to hell featuring extended layovers in a string of audio re-education camps with entertainment provided by a mopey, poetry-writing high-school girl circa 1975. Listening to this station is about as pleasant as spending the second full day of your summer diet hungover and trying on woolen underwear at the Barney’s warehouse sale — with Barry Manilow singing Copacabana on an endless loop on the sound system.

Anyways, being rather absorbed in the game, we weren’t really paying close attention to the music, so when we heard the opening lurch of The Wreck of the Edmond Fitzgerald we chuckled because Gordon Lightfoot in general, and this song in particular, have both become running jokes in our house. Listening to this stinker always makes me feel a bit queas-Y, like I’m barreling along with the God forsaken crew when the gales of November come ear-LY. Just thinking about this song makes me seasick. And always I ask myself the same question, Does anyone know where the love of God goes when this song turns the minutes to hou-ERS?

I find this performance particularly irritating because Gord sings it in Canadian instead of the regular English he used on the record. Maybe his jaw’s tired from all that emoting, or it could be he’s just too lazy to open up his mouth. Hard to know. Harder still to care.

“Ah know you’re in there, Vicki Lawrence!”
Via Huffington Post.

Too lazy to get up and reset the radio, we were both hoping this song would be the musical equivalent of a long overdue belch that clears the line and makes way for a cleaner, purer flow of sound. How wrong we were; what followed was one or another of Billy Joel’s nasty mid-career hits, all of which are putrid, but none more so than Piano Man. This was not the selection chosen by The Bridge; however, we changed the station immediately anyway, sensing a trend that could only lead to something far worse, along the lines of Billy Don’t Be a Hero or Brandy You’re a Fine Girl. Just the mention of one of those songs will create an immediate, soul destroying earworm that can last days, or even weeks. Many good people have cracked under less pressure than that. You remember what happened to Britney, who, I have it on good authority, was heard listening to The Night the Lights Went Out in Georgia over and over right before she took a golf umbrella to that car.

The game ended and as we repaired to the living room for a nightcap, a lively debate about the worst pop song ever committed to vinyl soon began: Piano Man or The Wreck of the Edmond Fitzgerald? Mr. Slattern, who is actually musical and therefore entitled to an opinion, takes the position that Billy Joel is the worse offender. He feels the faux Irishness, pretensions to crappy poetry (“a real estate novelist”) and limerick-y midline rhymes (“They sit at the BAR and put bread in my JAR”) make this song the worst one ever written. Further, he maintains, the instrumentation is insane and makes the cheesy lyrics and overwrought delivery indescribably worse, with a harmonica and an accordion locked in a fight to the death in the arrangement. Then of course there’s the wholly undeserved, smug, self-aggrandizing message (“Man, what are YOU doing here?”).

Listen, if you can bear it.

Now there are those who would not agree with Mr. Slattern that Piano Man is the worst song ever written. They might point to other notable entries in the oeuvre of the pride of Long Island, and they might be right.  Look: 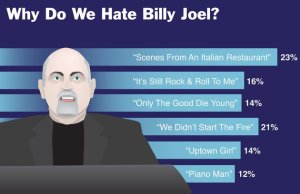 In truth, I can’t find much to argue with here, but I still have to give the edge to old Gordon Lightfoot in the worst song sweepstakes.  Of course, now I’m in the lowest level of music hell. Not only am I hungover and sleep deprived after staying up all night watching bad music videos on YouTube, but I’ve now got the lyrics to Piano Man running through my brain to the tune of The Wreck of the Edmond Fitz-GERALD. Both are in waltz time, you see. And really, what is a pop song doing in three-quarter time anyway? It doesn’t make sense.

Any opinions out there this fine Labor Day weekend? Which song do you think is worse? Got any write-in candidates? I’m all agog.