An open letter to the Race Committee

As a participant in this year’s contest, I’ve got a bone or two to pick with you. If you will consult your records, you’ll see that me and the missus once again finished dead last as has been the case for the past five years, except for the unforgettable 2008 race in which we bested that pair from Lewiston. You’ll recall that in that contest Mr. Norman French was ultimately disqualified for doping after it was discovered that he’d been taking Viagra for six days straight in the run-up to the race.  Any man that’s been in that state for nigh on to a week — without relief — would surely have an unnatural amount of energy to burn, and so although we were disappointed to again bring up the rear, so to speak, we understood the committee’s decision and accepted it without complaint.

As you no doubt know, my wife, being locally sourced, is substantially larger than most of the other wives, which brings me to my first point. I think there should be size divisions along the lines of boxing or wrestling. That little boney woman from Finland who won was no bigger than half a minute, barely even a flyweight. I could’ve carried her in my pocket and she’d have jangled like a handful of pennies, ferchrissakes. It’s just not right that I’m competing with twice that load (anyway) on my back. I’d estimate that my better half dresses out somewhere north of 200 pounds, making her a heavyweight, and while she’s still a fine figure of a woman, carrying her is no day at the beach. The log jump is particularly difficult, as it imperils the husband’s more delicate parts. If memory serves, the now disgraced Mr. French, bounced over that obstacle like he’d jumped on a trampoline. Apparently from the navel down he was number than a pounded thumb, but of course Mrs. French was probably no more than a middleweight anyway. 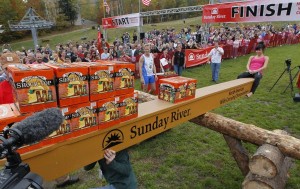 Hardly enough to keep most Mainers going for a week!
Courtesy Robert F. Bukaty and the Bangor Daily News.

I have my suspicions that this weight blindness has something to do with the winner receiving his wife’s weight in beer. Let’s just say that if my wife and I had won, you’d have needed a semi and a log skidder to get our winnings home. I’m not making any accusations, mind you, but I think the folks at Shock Top could be persuaded to be a bit more forthcoming with their prizes.

Since I’ve put pen to paper, I’d also like to call your attention to the issue of carrying style. As this is the NORTH AMERICAN championship, it should, I believe, require participants to carry American style, that is, either the standard fireman’s carry or the piggy back. This Estonian carry, with the wife upside down on the husband’s back, is just not right. In the event you are unfamiliar with its origins, I’d like to remind you that historically it was used to steal women from villages in some God-forsaken part of Europe that’s probably as cold as Maine, but doesn’t even have central heat or free and fair elections. My son-in-law, who’s some kind of smart-ass big brain from out-of-state, told me that and I believe him. He’s a professor at the community college, so I guess he’d know. And anyway, he showed me a map of where this Estonia is and I’d like to point out that it is suspiciously close to Finland, the country of origin of this year’s winners, whose names I can’t hardly pronounce let alone spell. Seems to me something’s fishy about that, and it ain’t pickled herring you smell. In any case, I believe the evidence speaks for itself, so I’ll say no more.

In closing, gentlemen, I’d like to just say that I and many like-minded Mainers look forward to the annual wife carrying contest even if it is dominated by sneaky Europeans and their underfed spouses. I know I am not the only one who would like to see the rules changed to make the contest fairer for indigenous participants with weight classes and a standard carry style. Failing that, perhaps you’d consider adding a cow tipping feature at the end. Just to level the pasture, you know.