← Kissing off the corporate payday
Stylin’ with Beppe → 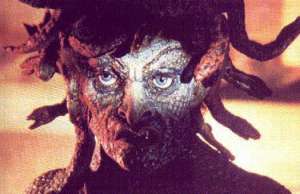 Exension! You need an extension? I don’t think so.
Gorgon via macrobusiness.com.au

As I sit across the desk from the Gorgon, I quickly become aware of, then alarmed by, the rising level of bile in my throat. It’s as if my gut is turning itself inside out to protest the gastric churning that accompanies this and every visit to my client (whose real name is Ann Marie) at the monstrously huge bank that charges me exorbitant fees for the privilege giving them my money to use. In the agency world, the bank is notorious for its vicious corporate culture of eating its young then shitting out the bones on unsuspecting vendors and agency peons, of which I was once one. Unsuspecting that is; unfortunately I’m still a peon.

Today’s pleasure cruise is going to be particularly toxic, as I have come to receive feedback on the copy for the closely-watched “Credit Pump” scam that encourages unsuspecting card holders to apply for the highest possible credit limit before infinity so that they will never, ever pay off their balances and in so doing sell their souls to the bank in return for a houseful of consumer goods they neither need nor use.

Having staved off the inevitable confrontation as long as possible with a revolting discussion of the Gorgon’s current physical state – eight months pregnant with what appears to be a Holstein, and retaining water like crazy by the look of her ankles and feet, which are propped on the wastebasket immediately to my right with HER SHOES OFF – I am now forced to broach the subject of the copy I have come to finalize. I really need to get out of this office and away from the nauseating smell that is wafting up from her filthy trotters and the abandoned ballet flats. (Payless, Tiffany blue, extra wide with yellow insoles and gold metallic studs on the toes. Perfect with her muumuu.) But first I need the Gorgon’s sign-off, so in desperation I dive in.

“You have comments for me?” I give her a smile that I hope communicates that I can be accommodating, but am not a pushover.

“Yeahr I do, it’s gotta’ be heah somewheah” the Gorgon says fishing around the mess of tatty papers cluttering her water-ringed, sticky looking desk top. “Okay, yeah, heah we go.”

She takes her time looking over the copy just to make me squirm, so I sit back in my chair and cross my legs, just to rub it in that I still can. Finally, she sighs and says, “I showed it to the workin’ group and they said it stunk.”

Well that’s helpful, I am tempted to reply, but I of course don’t. I also resist the urge to correct her conjugation of the verb “stink.” For Christ’s sake, you half-wit toad, I think, can’t you even insult me properly? Instead, I take out my own copy of the text and ask her if she could be more a little more specific.

“I dunno, they just said it wasn’t right for the theme and it needed ALOTTA work. They also said it was too long.”

The Gorgon glares expectantly at me through her colorless reptile eyes, and when she blinks I notice she’s got a smear of bright blue eye shadow on each puffy lid, presumably to coordinate with her shoes. Somehow it’s worse than the dirty, unpainted toenails, the cracked heels or even the stench. I haven’t seen that color on a human face since my National Geographic subscription lapsed in ‘83, but here it is, decorating the squinty, pink-rimmed peepers of the power-tripping troll who holds my job in her chubby little fist.

“I see,” I reply in my Meryl Streep voice, the one that’s about half an octave lower than my regular one. I use it when I’m in danger of swearing at inappropriate moments, such as when I get unhelpful, dumbass comments from a fucking cretin like this.

“So, which of the features do we need to take out, then? We’ve already vetted this with Legal, so it’s going to be tricky to change much. If you remember, their edits added about 25 percent to the length of the original copy.”

“We can’t take anything out, you know that. It just needsta be shortah.” The Gorgon’s smile is a lipless slash. She’s a fat tomcat playing with a half dead mouse now — her favorite thing.

I look down at the copy in my lap and make a couple of notes while I pretend to be scanning it for inspiration. “OK, well off the top of my head, I’m not sure how we’ll accommodate that, but let me take this back to the office and we’ll work with it. Did they give you any suggestions on how it could be improved or what exactly it was about the copy that stank?”

Now I’ve done it. She’s too dim to catch the dig about the verb tense, but she’ll never miss the opportunity to light me up and piss me out.

“They said there was no point in even makin’ any changes.” She gives me a grin that’s really a slap and shrugs as if to say, “Whaddya gonna’ do, girlfriend?”

“There was one thing, though,” she says looking like the light dawning on Marble Head. “They said you put all the quotation mawks in the wrong place. They want ‘em before the periods.”

The unspoken “Stupid” that goes on the end of this sentence is un-subtly implied, and I am amazed she still tries shit like this with me. When we were on press for the “Rake in the Savings” underwater mortgage refinancing promotion, she made me stop the printing because she insisted the sentence that began, “The benefits of refinancing your mortgage are….” should have been “The benefits of refinancing your mortgage is…” I explained the subject/verb relationship, diagrammed the sentence and even Googled various grammar sites. We were on the verge of pulling the plug and printing it wrong when someone came up with a grammar book and the Gorgon had to give in. She’s never forgiven me.

“In American English,” I begin, going all Professor Bigbrain on her ass, “the quotation marks go outside the period. You may have seen them inside in British publications, but we do it the other way. If you have an AP Style Book, I can show you.” I am Little Mary Sunshine now. I’m baiting her, and she knows it. Last time we were waiting around on a press run, she was openly reading Fifty Shades of Grey, so I am quite certain her stubby, sausage fingers have never handled anything published in the UK, or even Canada.

“Well, you’re the writah,” she says, clearly unconvinced. I consider the possibility that she’ll tell me the bank prefers British usage and make a mental note to get that in writing, but she doesn’t. Instead she says, “Aright, I got anothah meetin’ in five minutes and I gotta’ go pee before.” What a delightful image that is.

She seems to be preparing to heave herself out of the chair by shoving her belly up and forward. I think maybe I should offer her a hand, but the idea of touching her makes me squeamish and I’m afraid we’ll both end up in the chair with me on top of her, so I try to look busy with my papers. Rather than witness the grotesque spectacle of her stuffing her feet back into the blue shoes or worse, watching her waddle barefoot across the slimy carpet and hearing the ticky tacky sound I know it will make, I thank her for her time make for the door. I feel like I’m walking on my toenails all the way down to the lobby.

Four rounds, another no-decision, but I’ll be ready for you next time, bitch.

← Kissing off the corporate payday
Stylin’ with Beppe →