← Surrender Your Dignity: The horror of the skin check
Adding insult to indignity. That’s just the way it flows. →

The Slattern’s guide to Italian travel

Can you believe they hadn’t heard of the Vino-2-Go in ITALY?

As recently chronicled, Mr. Slattern and I just returned from two glorious, albeit damp, weeks in Italia. And let me tell you the Italians were the salt of the Earth. To a man, woman and child they were unfailingly polite, helpful and kind  — except for that unfortunate misunderstanding about whether the bottles of Barolo were “to go,” but once we made bail, reacquired our passports and had the dents pounded out of the polizione prowl car, it was all was bonhomie, back slapping and three new names for the Christmas card list. But I digress.

In any case, I cannot urge you strongly enough to do whatever is necessary — save your nickels, sell the family silver, cash in the kids’ college funds — and  get yourselves over there. In support of this, I am starting a new travel series, and over the coming weeks I will be answering your travel questions and offering helpful tips and strategies for squeezing the maximum amount of fun from your Italian idyll (while staying out of jail). 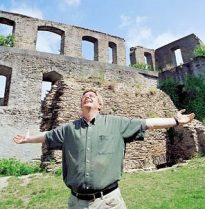 Party while you still can, Voyage Boy.

So listen up there, Rick Steves, you’d better grab that fanny pack and get out of my way. The juggernaut that will soon become the Slattern’s travel empire starts rolling right now. Andiamo!

I don’t speak Italian, but I have a burning desire to take a gondola ride and drop in on the Pope. How will I get around without knowing the language?

First, kudos on wanting to put Duluth in the rear view. Well done. And may I suggest a course of antibiotics for that burning sensation?

Now to your query. During my recent trip I was delighted to discover that English has become the lingua franca of Europe, which was a big relief since Mr. Slattern’s and my efforts to learn Italian prior to departing were not exactly crowned with success, as the saying goes. I suspect this was because we listened to our Pimsleur Italian lessons while swilling vast oceans of Insolia, just to get in the spirit. While it was certainly a festive way to pick up the dialect, and we were chatting like nobody’s business during the lessons, unfortunately most mornings we could not remember one word of what we had studied the night before, and more often than not we woke up wearing yesterdays’ clothes after having slept on the living room floor.

And so our linguistic exertions netted us little more than the ability to accost a young Italian woman in the street and inform her that we could not speak Italian. Not as helpful as you might think. 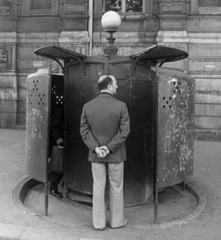 Now Mr. Slattern speaks lovely German, we both dabble in Spanish, and I have a certain proficiency with French – I used to speak it quite well, but these days my skills are a bit moldy. When sober, I’m lucky if I can make myself understood at the level of a mildly retarded pissoir attendant. After a bottle or three of Bordeaux, however, it gets better, as I resemble a mildly retarded pissoir attendant who is really REALLY enthusiastic about speaking French. So drinking facilitates communication is the lesson here.

Thankfully, these days Italian sewer workers speak better English than most of the residents of New York City and the entire deep south, so we got along fine on English, especially once we had looked up and practiced the following:

Roughly translated, this means, “I’m sorry, but I am a complete fucking cretin who has swanked into your magnificent country speaking not one sainted word of your heartbreakingly beautiful language, but I hope that if I throw around enough cash, you won’t mind too much.” Quite often we’d be interrupted after the first couple of words with a pained, “English, please.” Understandably so.

Thanks to the unfailing politeness of the Italian people, however, we still managed to have a rollicking good time while visiting the sites, gazing upon the world’s most magnificent art and sucking up more fine food and wine than most Americans see in a lifetime. It was excessive on a Caligula-esque scale, and really isn’t that what we go abroad for?

So, forget Italian 101 and wing it is my advice. Just remember, there’s no such thing as a go cup in a wine bar.

← Surrender Your Dignity: The horror of the skin check
Adding insult to indignity. That’s just the way it flows. →