Normally I avoid straying into political territory in social situations and my online ramblings. More often than not, the combination of my slightly off-kilter views, propensity for personal mockery and three-cocktail minimum tends to ruffle the feathers of my dinner companions, and has even cost me the occasional friendship. And what’s the point? It isn’t as if my insights, no matter how razor sharp, are going to change anyone’s position or worldview. No, I find it’s best to just smile and nod when politics come up, then steer the conversation in a less contentious direction, such as whether Martha Stewart bathes in her own urine, chews broken glass for breakfast and transforms into something even more terrifying than her TV persona at the full moon.

So that’s my policy. Or it was until the Weiner-Spitzer story picked up steam and I felt compelled to opine on the whole sordid, sorry mess. For what it’s worth here’s my two martinis’ worth.

“One is a genius, the other is insane.”

Do you have to be a narcissistic attention junkie with the scruples of a used car salesman and the professional standards of a carnival barker to run for political office these days? Maybe not, but apparently it helps. Given the steady stream of rehabilitation-flogging, forgiveness-demanding, scandal-tarred politicos seeking second chances from the voters they betrayed, not to mention their beleaguered families, what else makes sense? Not so much shameless as utterly unshameable, Anthony Weiner and Eliot Spitzer want their redemption, and they want it now.

Of course, sex scandals are nothing new in government. There was Grover Cleveland in 1884; Wilbur Mills and the strippers in the mid Seventies; Marion Barry’s 1990 ‘ho and crack fest (“Bitch set me up!” ring any bells?); Bill Clinton and his Oval Office shenanigans; and most recently Mark Sanford’s infamous Appalachian Trail of Tears (and big fat lies).

In the current political climate it seems anyone can come back from almost anything. Except maybe trying to solicit gay sex in a men’s room using sign language. An infringement on the Americans with Disabilities Act, perhaps?

See what I mean?

Owing to a fortuitous special election, Sanford is well ahead of his fellow travelers on Redemption Road, but New Yorkers move fast, and Spitzer and Weiner have a lot more baggage to dump. These two, it seems to me, have more in common than non-standard sexual tastes, over-inflated balloon heads, no principles and wives who are way too good for them. There’s a detectable whiff of narcissism about them both, though clearly Spitzer is the brighter of the two, The Brain to Weiner’s Pinky, if you will.

As you no doubt recall, Spitzer, the former Big Stick of lower Broadway, was chased from the governor’s mansion (presumably with his socks on) in 2008 after being identified as Client #9 in a prostitution sting. The long-married father of three somehow managed to avoid prosecution and hold on to his lovely, if bafflingly-loyal wife, and he is now running for New York City comptroller. He may even win. So let’s break this down: New Yorkers are seriously considering handing the financial reins of the nation’s biggest city and most powerful economic engine to a man with poor judgment, no impulse control and a pattern of aggression and lying. Sounds good to me. In fact, it sounds a lot like Anthony Weiner to me. 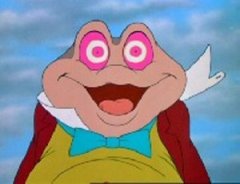 The flash of the camera phone in his face, the bleep of the sent selfie, and the illicit thrill of his naughtiness intoxicated his weak brain.

Weiner – the Mr. Toad of sexting – is asking the voters of New York City to make him Mayor Bloomberg’s successor, despite his 2011 disgrace and a newly revealed phone sex relationship with a 22 year-old woman. Kind of puts a new spin on the notion of Bloomie’s nanny state, doesn’t it? See my comments above re: judgment, impulse control and lying. I can’t imagine what’s going on in his wife’s mind, but as Kingsley Amis rightly observed, “Other people’s priorities are endlessly odd.”

By now, the other mayoral hopefuls have issued the standard calls for Weiner’s withdrawal, most notably John Liu, the current city comptroller. He pointed out that Weiner’s “propensity for pornographic selfies is a valid issue for voters.”

Well there you have it. And so, despite his own scandal problems, Mr. Liu just got my vote purely on the basis of that observation. If the public can’t expect accountability and integrity from its elected representatives, maybe we can get by on humor.