Headline from the Daily Mail

Three different meals in one night? This cannot be true. Doesn’t anybody remember the days of “eat that Swedish meatball/fish pie/liver and onion surprise, or go to bed hungry”? We all survived it — well maybe that’s a stretch. I’m sure someone was done in by Rumaki at some point in human history, and certainly more than one innocent child has been forever emotionally scarred by a plate of organ meats, but still, can it really be that there are parents out there who are actually going through the hell of getting three different meals on the table at once after cocktail hour has begun? How can this be? I mean really, making one decent meal  a night is freakin’ hard enough, but three different ones? And if this is going on in the UK, where people are far more practical than over here in the land of Everybody’s Special, can you imagine what’s happening in kitchens across the US? Are Americans making five meals a night? 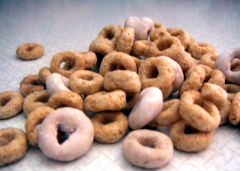 Cheerios: breakfast, lunch and dinner of champions. Via Wikimedia commons.

Now, I’m not entirely sure how I stumbled upon this article, but I can tell you this: There is absolutely no way anyone should be making multiple meals at any time or for any reason. That’s why God, in His infinite wisdom, invented cereal. Now, is Cheerios  an adequate, nutritious meal? Not every night of the week, but it can easily be prepared by even the most the recalcitrant four year-old, it does not create much in the way of extra clean up, and as an occasional dinner it probably will neither kill nor traumatize even the spleeniest, most specialest child.

I’ve got to say that this article has really rocked my world. It may have been some time since I grappled with a finicky child, but I can certainly recall occasions when the little Slattern’s dinner consisted exclusively of rice and salt. On nights like that the only way peas made it into her body was through her nose, and let me tell you extracting them took some little effort. But whatever, the next morning she’d wake up hungry and happily tuck into scrambled eggs and apple slices for breakfast and no one was any the worse for wear. Unless of course we’d had to perform some nasal fracking the night before. (By the way, I have found that a little black pepper on the upper lip consistently produces a sneeze strong enough to dislodge event the most deeply impacted produce.)

Acceptable only after four double vodkas, never as the result of multiple meals.
Via myhealthyprespectives.com.

Slattern in the city

There’s fun to be had in SOME kitchens, Sweetie. Courtesy montrealsimon.blogspot.com

I don’t claim to have cornered the market on slattern-dom, and I certainly didn’t invent it. I have, however, done my level best to elevate the art form over the past twenty years or so, and as I look back on the cluttered landscape of middling meals, drunken dinner parties and neglected housekeeping that has been my life, it occurs to me that none of this could have been so easily accomplished outside the urban jungle. Let me explain.

First of all, the urban environment is easy on the domestic tippler. Let’s say it’s five o’clock and you and a couple of pals have been having a friendly chat over a bottle of vodka for the past few hours. You realize you were supposed to pick up your kids from soccer practice, but getting behind the wheel is no longer an option. No need to endanger the driving public, disturb your better half or give up your parking space — just call a livery service and send a car to pick them up. After three or four instances of this, most city teens will learn to take a twenty from your purse before leaving the house, store the car service number in their phones and call the ride themselves after waiting around for an hour or so. Kids these days!

END_OF_DOCUMENT_TOKEN_TO_BE_REPLACED

My other kitchen is a hotel

As the six-month anniversary of my little experiment in self-expression draws near, I note that there seems to be a bit of confusion among my readers as to my feelings about the domestic arts in general and cooking in particular. Frankly, this surprises me since my opinion on the subject appears, at least to me, to have been made abundantly clear in this, my little corner of the web. But in the interest of enlightenment and with an eye toward full disclosure, let me be clear.

I would be completely happy if I never cooked another damned meal*,  set foot in a fully functional kitchen, or laid eyes on a vacuum cleaner again for the rest of my life.

Oh yes, I would be perfectly content to order in or dine out every night for the remainder of my time in this earthly paradise, and if someone wanted to meet me for lunch most days, that would be fine too. In fact, I’d be willing to forego the midday meal altogether just to avoid having to provision, prepare and clear it. If you’d ever had a squint at me, you’d understand the enormity of that statement. Let’s just say you could count the number of meals I have missed in the past year on one hand without stressing the pinky or thumb unduly and leave it at that.

I would miss housekeeping even less than cooking, and so I am flummoxed when I hear my friends (to clarify, my older friends) talking about downsizing plans that involve offloading houses and acquiring condominiums. Yes, it’s less square footage, and not so much hassle, but you still own the damned thing. When the toilet backs up it’s you wielding the plunger. If the Baked Alaska suddenly becomes the Towering Inferno, you’d best know where the fire extinguisher is and how to use it (not to mention being able to convince the firefighters you were in full possession of your faculties when the “incident” occurred, but that’s a story for another day). And when the refrigerator gives up the ghost, you’ve got to source and buy another, only to start the whole ugly business of meal prep over again. Ditto the stove. And who in his right mind would want to do that, for pity’s sake?

Now I do have friends who have very cleverly repurposed their kitchen appliances as storage, and if I owned furs (I don’t, I just can’t), I would certainly keep them in the fridge. I used to keep my film there, but digital photography has eliminated the need. As it is, my nail polish collection is doing well on ice, but really, who has that much lacquer? So it’s either unplug the damned thing or fill it up. And once it’s filled, you’ve got to cook. Really it’s that simple. And that sad.

So, imagine how thrilled I was recently to hear a fresh solution to the downsizing question from none other than my brilliant cousin, Rebecca! Ready? Here it is: Skip the condo, bypass the rental apartment and go straight to a hotel.

Consider  — there’s no kitchen, save for a coffee maker and a minibar (what else do you really need?). You get room service, daily maid service (provided by someone other than yourself), laundry service, porters, and your bed turned down every night with a little mint on the pillow. And the bar is right downstairs!  It would be just like assisted living, but without  the colostomy bags, institutional food and restraints. In fact, come to think of it, it would be very like Betty Ford, sans Betty or any of the other killjoys who infest her establishment.

Why was this woman smiling? Because she still had cocktail hour to look forward to after a hard day at the ballpark. Many people don’t realize what a baseball fan Mrs Ford was or how critical her support for clearer stats and the Earned Run Average movement was. Courtesy Wikipedia.

Just thinking about the possibilities of permanent guest status nearly makes me drop to the floor and rock in a frenzy of overstimulated bliss. My path is clear, now if I could just get my head to follow.

* NOTE: Exceptions would of course be made for the odd dinner party, provided it was limited to no more than eight guests and someone else cleaned up.

Fear and loathing at the Fairway 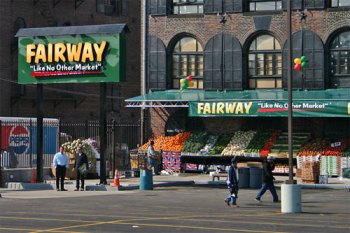 I’m writing today to clarify certain events leading up to the recent unfortunate situation in your Red Hook store involving myself, the assistant manager, six grocery carts, some allegedly stolen beer and my car. First, I’d like to assure you that my personal liability umbrella policy is up-to-date and all damage to your property and medical expenses incurred by your staff will be covered. This is, however, in no way an admission of guilt. I maintain I was provoked, even driven to despair, in the hours leading up to the “incident” in the parking lot, and in the interest of avoiding further such problems would like to explain. I know I am not alone in my feelings about your store.

Let me begin by saying that the converted warehouse by the water is a lovely location, and at first glance a beautiful, inviting store. Your merchandising scheme, however, appears to have been hatched by a bunch of fun house planners in collaboration with inmates of a state mental hospital who have been off their meds for some little time. For example, there are spices in at least four locations, and I can only assume there may be more. By the time I get to display number three on any given trip I’ve forgotten whether I need cumin or coriander, not to mention where I am and the correct spelling of my own name.

END_OF_DOCUMENT_TOKEN_TO_BE_REPLACED

Posted in Drudgery, Words to live by

It’s time to clean up your act

So in the spirit of being “helpful,” a friend sent me a pdf entitled “2012 Declutter and Organize Calendar” which was created by an obviously well-intentioned woman named Beth. Now I’m sure that, as a professional organizer, Beth has seen things that would make even a marginally functional adult like myself shudder. I’ve watched Hoarders. In fact I even have a sneaking fondness for those two English ladies who go around sniffing other people’s filthy toilets and soiled bed linens. I love them even though they terrify me.

So anyhoo, here’s the thing, the calendar was created by a woman whose business is life simplification, and it runs 15 pages. 15 pages of instructions on how to simplify your life! There is a task for every single day of the year, even Christmas (“Let go of craft projects you have lost interest in” – no problem there, so technically that would be a day off for me) and my birthday (“Declutter foot massagers, back scratchers, heating things if you don’t use” – Huh?).

OK, this is madness. Spending an entire year cleaning up your house? Let me save you 364 days of torture:

If your house is a cluttery pig pen, get rid of half of your stuff.*

*Does not apply to shoes or items in the portable bar.

Posted in Cleaning up, Drudgery, The easy way