The marketing geniuses at 16 Handles promote squash-flavored ooze as “Fist Pumpkin” and invite the public to Size It!, Pull It! and Top It!. No, I am not kidding.

Tell me the truth. Is it me? 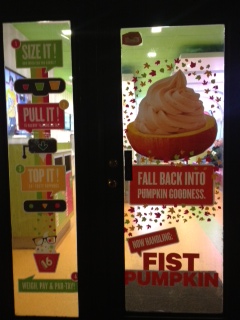 So, the other night, Mr. Slattern and I passed the local 16 Handles outpost on the way home from a delightful dinner and movie date that featured the magical combination of George Clooney, brick oven pizza and at least half a dozen Aperol Spritzes — each. As you might imagine, we were in a pretty festive mood.  And so it was with some little merriment, and a fair bit of snorting, that we noted, and photographed, the  promotional campaign for the newest flavor of the fro-yo chain’s petroleum byproduct dessert food, which is apparently chockablock with “pumpkin goodness.”

The next morning, with a somewhat clearer head, I wondered whether the whole incident had been a mere figment of my imagination — a sort of Lost Weekend moment. But then I scrolled through my messages and came upon the evidence in the form of a snap taken by my better half, who somehow managed to hold his camera-phone steady while laughing uproariously with a not insignificant load on. Just a guy, but what a guy.

Anyways, getting back to the pumpkin sludge we are being invited to fist…oh forget it. You take my point by now I’m sure, and if you don’t, you’re probably better off. File it under “What were they thinking?” and try to salvage what little regard for the intelligence of the human race you have left is my advice.