Set that bluegrass on fire! 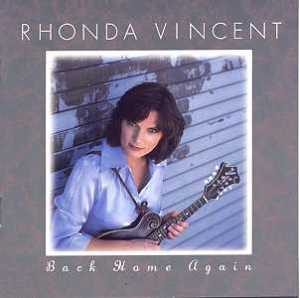 Now I know what you’re going to say: Bluegrass is for square dancers, hillbillies and flannel-clad hipsters. Truth be told, as a rule, it’s not one of my favorite genres, but I make the occasional exception for the greats: Ralph Stanley, Chris Thile and the musical queen of the Smokey Mountains, the one and only Miss Dolly Parton.

To my way of thinking, Jolene is one of the greatest heart-broke ballads ever written. Plaintive and gorgeous, it’s musical heaven in my book. So you’ll understand why I was dubious when my better half brought home a CD that included a cover of Dolly’s magnum opus some years ago. I was very skeptical, but lord have mercy, was I wrong.

Backed up by The Rage, Rhonda Vincent puts some serious fire in bluegrass music. Not only does she have a great set of pipes, but she can really play. This is seriously hot stuff. Give a listen.

Is your computer smoking yet? No? Then you don’t have the volume up high enough.

A big thank you to my blog buddy Tom Wisk for motivating me to get back to work with his latest post.

Think you can handle more musical ramblings? OK, but don’t say I didn’t warn you — it can get a little weird hanging around my iPod. 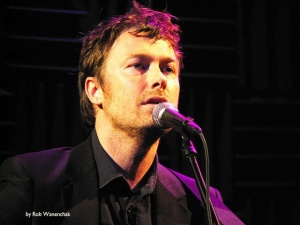 Living as I do in the Big Apple, and married as I am to the very musical Mr. Slattern, I get lots of chances to hear music from people far more talented, yet far less famous than the vast majority of middling “big names” currently cluttering up the airwaves with their mediocre wailing and warbling.

Now I’ve been inspired by the Sportsglutton’s Monday Morning Humor, which always hands me a laugh and really helps get my week started on the right rack. In that spirit, I’d like to share some of my musical discoveries in the coming weeks. For the moment I have to confine my media choices to video, but I am working with the WordPress gods to figure out how to share audio from my extensive iTunes library.

Anyways, for starters, I’d like to introduce those of you who are unfamiliar with him, to my favorite Irish singer/songwriter, the delightful Mark Geary. Pop a Guinness, close your eyes and imagine yourself in a comfy chair by the fire in a cozy Dublin bar. Ahhhh.

Posted in Good to know, Music 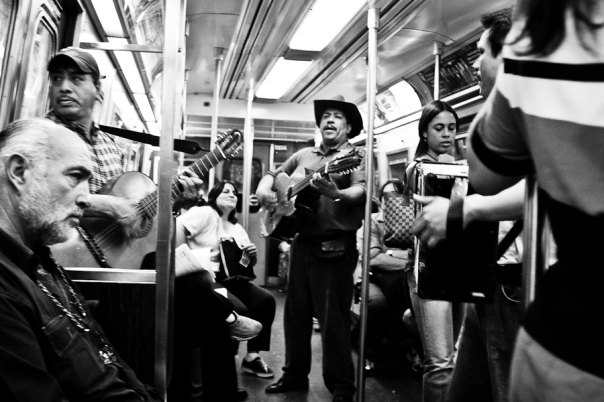 Yesterday, I was riding uptown on the number 1 train, or the IRT as those of us old enough to recall New York when it was worse (and we liked it that way) sometimes refer to it, when a group of Mexican buskers boarded my car and favored us all with a little musica. Now I always enjoy an impromptu concert during my commute and generally tip the performers to say thanks; yesterday’s trip was no exception.

But as they strummed and sang, it occurred to me that, as far as I could tell, they were singing exactly the same song that every Mexican group I have ever heard on the subway performs. You know the one — it’s an up-tempo, cheery number that’s rendered on a couple of guitars, occasionally accompanied by an accordion, and it usually features two vocalists. This one:

So what I’m wondering is this. Do they all really sing the same song, or do I just think so because I don’t speak Spanish and am completely tone deaf? Maybe it’s easier to dance if you only have one song or it could be that’s why so many musicians come here — to expand their repertoire.

“I did NOT have musical relations with that disco band”

Confession can be good for the soul, man

Our Father, the King via mattstone.blogs.com

Forgive me Father Elvis, for I have sinned. It’s been thirty-five years — give or take — since my last confession, and as such I can’t really tell you how many times I’ve slipped or exactly what I’ve done. Given the timeframe we’re dealing with here, it’s probably safe to assume I’ve committed all of the seven deadlies at least once, though I’m pleased to report I’ve been almost completely mortal sin-free since we last spoke. True, I’ve been a little lax on the blasphemy front, but otherwise I think I’m pretty solid.

What’s that? Specifics? Well OK, if you insist.

Rack ’em and stack ’em. We don’t need no iPod. Via vinmag.com.

I’d just like to begin by saying that I started out really well. The Sixties were chockablock with great music, and my parents were young and hip. We even had a big old stereo with lots of records – Yourself, the Stones, the Kinks, the Beatles, Little Richard, Chuck Berry, a little soul, a smattering of R&B. The usual. Tasteful, interesting stuff. Hard to say how I strayed from the garden path.

I guess I’d have to say my most frequent transgressions have been the singers who can’t sing. It started innocently enough with Bob Dylan: Mr. Tambourine Man, Blowin’ in the Wind, Highway 61 — you remember, don’t you? He’d scratch that guitar and wheeze into his harmonica and we all thought it sounded, well not exactly good, but cool. By the time we got to Blonde on Blonde, everybody was hooked. From there it wasn’t much of a trip to buying Neil Young records. Hell, after that, Tom Petty sounded just fine, and Bono seemed kind of smooth. I know it looks bad (and sounds even worse), but in my own defense, I’d like to point out that that Robbie Robertson album was a one-shot deal and I never even considered buying anything recorded by Bjork. That’s got to count for something.

What’s that, sir? More? Yeah, there’s more, and since we’re both already here, I guess we should talk about the Eighties. You know, it wasn’t all New Wave pablum. I did go to several Ramones shows, and I saw The Pretenders more than once. I also seem to recall an Eric Clapton/Muddy Waters double bill, but the details from that particular night are a little hazy. I know you’ll understand where I’m coming from on that.

Not even a SNIFF of this in my past. Via electronic80s.blogspot.com

Pardon? Depeche Mode? Aw c’mon man, I was living in England at the time and given the omnipresence of Top of the Pops it could have been a lot worse. You do remember Culture Club? How about Rick Astly? Never even got near either one. No, I think my little flirtation with New Wave hardly even qualifies as venal.

Of course, I can’t say the same for the chick singers. Though I’m more than a little ashamed to admit it, I did buy Sheryl Crow’s first album, but it was a Grammy winner and even though it contains that uber-stinker Strong Enough, there’s also Leaving Las Vegas and a couple of other reasonable efforts, though I can’t really recall them at this point. How was I to know she’d go all save-the-planet and start dating Lance Armstrong? And remember, I have always been a big Patti Smith fan, which I’m thinking should counterbalance that unfortunate Sheryl Crow business.

There is one thing I do need to get off my chest though. That’s right, you guessed it: Stevie. Not Wonder, Nicks. I bought a Stevie Nicks record in college for reasons I still don’t understand. Maybe it was the adenoidal warbling (bad singers — see above) or the platform shoes. Hell it might even have been the twirling. All I can say is I am really really sorry, and I have already repented in my heart and at length, so I hope you’ll go easy on me. I mean, we’ve all got our guilty pleasures, right? Grilled peanut butter and banana sandwiches ring any bells? How about In the Ghetto?

Yeah yeah, I know we’re talking about me now. Listen, I realize it looks bad, Sir, but before you hand out penance, I’d just like to remind you that I have a deep and abiding love for the high quality stuff — Nirvana, the Foos, Lenny Kravitz, Elvis (no the other one, Costello. Loved the country album. I know, right? Who’d a thunk?)…Oh, well thanks. I try to stay current.

Act of contrition? Really? I know my record is hardly unblemished, but doesn’t my consumption of tasteful, worthy music count for anything? OK, OK, no need to shout. Let me get a pen. Alright, shoot.

Three Half Breeds — Cher! You don’t fool around, do you?

Three Lost in Loves — Air Supply? I’d hardly have thought they’d be on your radar, but it’ll be good and painful.

Twice all the way through We Built This City — Tough to listen to Grace Slick doing that, but you’re driving this bus. It’s harsh, but I can handle it. Check.

So, we done here?

A fate worse than…well I don’t know what.

WHAT?! Piano Man!?! You have got to be kidding me! Quite possibly the worst song from the worst album ever recorded. Just the mention of it gives me an earworm. If I listen to it even once, it’ll be stuck in my brain for a week. C’mon, anything but that. Please?

Alright, alright, I’ll do it — relax. And no, you do not have to assign the entire record. I mean it’s not like I tried roller disco, or bought Guns ‘N Roses tickets or anything.

Pardon? Six weeks from now? Couldn’t we stretch it to six months? I’ve got Punch Brothers tickets coming up and Sir Paul’s supposed to be playing in the City again. Of course, I’ve also heard Fleetwood Mac may be touring…I’ll see you in June.

Posted in Music, The Slattern Speaks

According to the forecasters, today in New York, the mercury will climb to 90 degrees (Farenheit, not Celsius for my Euro friends — fear not). The lilacs are blooming, the grill is up and running and the rum is flowing like water through the proverbial desert of my life. In short, folks, I’m in the mood for a party.

Some of you may recall an earlier foray into the party mix arena that we took at Christmas. I was somewhat surprised that my readers had any interest at all in the subject of what to fill the speakers with, though a good party mix is crucial to a festive evening, and essential if you’re hoping to stretch the evening well into the next day. In my opinion, it’s not a party until someone dons the lampshade, strips naked or frugs on the dining table. If one intrepid guest takes on all three at once, well, he’s probably a close relative of mine, and I’d hope others would join in the spirit of the moment and eventually call me to the ER. I realize not everyone keeps a stomach pump on hand, though for the life of me I don’t know why. Ours is right next to its pal the fire extinguisher, and I’d be lying if I said we frequently used one without the other, especially around the holidays. So there you go.