Back in the day, Mr. Slattern used to play rockabilly guitar in all manner of disreputable bars in and around the city, and I won’t lie, I spent many happy hours on bar stools in those same venues tossing back cocktails and bopping the blues with his various bands, combos and ensembles. Before he moved on to other instruments and styles, my better (and more musical) half played with lots of ridiculously talented folks, such as front man, novelist and Han Solo lookalike Steve Szilagyi, the lovely Edith Frost, New Orleans’ own Lenny Zenith, and  Phil Hummer when he was backed by the Roadhouse Romeos. Though Steve has traded his guitar for a pen, the rest are still producing great music, and I cannot urge you strongly enough to investigate their websites and acquire their CDs.

Not convinced? Check out Phil Hummer. This video was shot in 1997 (not 77 as indicated) and features Mr. Slattern on guitar, which is why I chose it over more recent video of Phil and his current band, the White Falcons, though they are certainly churning out some mighty fine music down there in Nashville.

All these folks are worth listening to, as are thousands of musicians out gigging in your local bars, auditoriums and streets. There’s a world of live music just waiting to be discovered. Get out and give it a listen, why don’t ya’?

Posted in Good to know, Music

Thirsty Thursday: Knocking back a Sazerac 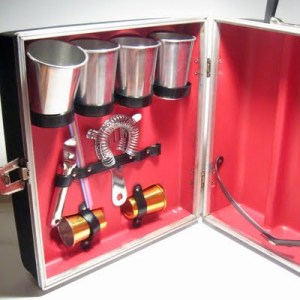 From the portable bar — The other day, the Taller than Average Woman sent me a recipe for a cocktail she invented that called for 99 Blackberries, which I had never heard of. Turns out it’s a blackberry flavored schnapps made by the Sazerac Company, and that got me to thinking that I hadn’t heard anyone mention the Big Easy’s favorite potable, the Sazerac cocktail, in a very long time. Now, as it involves rye, the spirit of the moment among liquor cognoscenti, I presume the Sazerac (I just love the sound of that, don’t you?) has made a resurgence and I’m just not up to speed. As a rule I avoid bars where the bartender is called a mixologist and there’s an excessive amount of muddling going on. Well truth be told, I might perhaps have worn out my welcome in one or two of them, but that’s a story for another day.