“It was just a Zumba class, Honey” 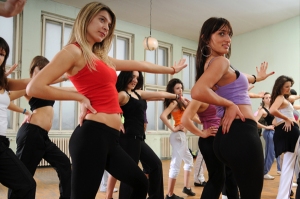 Add this, if you will, to the pantheon of history’s filthiest matrimonial lies, right alongside “I was just standing next to my secretary/Mrs. Hot Shorts from next door/the arresting officer when she sprayed herself with perfume,” or, “I have absolutely no idea how lipstick got on my jockey shorts,” or my personal favorite, “Don’t worry, I’ll pull out BEFORE, I promise.” Not that I have any first hand knowledge of these, as Mr. Slattern is a model of propriety and rectitude. But one hears things.

Now, unless you live in the great state of Maine or its environs, the story of the prostitution ring operating out of a Kennebunk Zumba studio may have escaped your notice. I happened upon it only because I was “up home” last week closing up shop at our little hideaway, the chateau debris by the sea, or as we like to call the process, opening up the rodent hostel for yet another festive winter season. So amidst the washing, stowing and folding, imagine my delight at stumbling upon the coverage of this local cause célèbre in the daily local newspaper. Apparently the instructor, one Alexis Wright (which I strongly suspect to be an assumed name) had been trading sexual favors for cash, which is bad enough, but to make matters worse, she had not been declaring the income, and so like Al Capone, was busted for tax evasion, in addition to over a hundred charges of prostitution.

All of this is sad and tawdry, but here’s what has me flummoxed. What woman in her right mind believes her husband when he announces he has lately got a yen for more exercise and has decided to join a Zumba class? For those of you who are not familiar with Zumba, here’s my favorite description:

…a dance class spirited with Latin and international beats, a mix of rhythms, resistance training and hot and spicy aerobic conditioning. Zumba’s combination of interval training and body sculpting in an easy-to-follow dance format will have you shredding calories and grooving your body into super shape.

Let us, for the nonce, skip over the obvious question of how, exactly, one goes about “shredding” calories and focus instead on the hot and spicy grooving. Look:

Now, can you possibly imagine a group of middle-aged, heterosexual Maine men – even in as cosmopolitan an area as Kennebunk – gathering in a group to do this? Neither can I, though it certainly is entertaining to try. For some reason I get an image of Fred Flintstone trying to rhumba with Charro, and once that picture comes to mind it’s mighty tough to shake it.

“I wanted them all. Every. Single. One”
Courtesy AP via the Portland Press Herald.

This brings me to my second question. What could conceivably be running through the mind of a man who is paying a woman for sex? Now whether it’s a lap dance or the full Lovelace, it is well beyond the realm of possibility that the woman is having any fun. If she were, there’d be no need to tip. And yet, somehow certain male brains seem capable of processing this experience as “I think this young, gum-snapping, surgically enhanced gal likes me,” or at the very least, “I’m prepared to believe she doesn’t despise me or find me pathetic.” Wrong on both counts, buddy. Unless you’re a Brad Pitt lookalike with stack of C-notes the size of a Winnebago and a Lear jet parked outside, there is no way a sex worker of any stripe is going to find you hot, or even lukewarm. Not possible.

So why do it? I guess you’d have to ask someone from the published list of johns (who range in age from 34 to 65, every single one of whom should have known better). Maybe they’d say it was the spicy aerobics that got them all overheated. Or perhaps it was the prospect of illicit relations with a winsome, sweaty fitness buff. Who can say? In the end, who really cares?

In any case, ladies, if your better half ever evinces an interest Zumba, I’d suggest consulting an attorney. Don’t say I didn’t warn you.